Bonus Army WWWI  – The Bonus Army was the popular name for an assemblage of some 43,000 marchers—17,000 U.S. World War I veterans, their families, and affiliated groups—who gathered in Washington, D.C. in the summer of 1932 to demand cash-payment redemption of their service certificates. 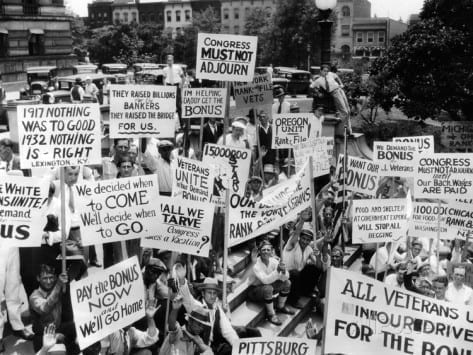 Many of the war veterans had been out of work since the beginning of the Great Depression. The World War Adjusted Compensation Act of 1924 had awarded them bonuses in the form of certificates they could not redeem until 1945. Each service certificate, issued to a qualified veteran soldier, bore a face value equal to the soldier’s promised payment plus compound interest. The principal demand of the Bonus Army was the immediate cash payment of their certificates.

Retired Marine Corps Major General Smedley Butler, one of the most popular military figures of the time, visited their camp to back the effort and encourage them.[1] On July 28, U.S. Attorney General William  D. Mitchell ordered the veterans removed from all government property. Washington police met with resistance, shots were fired and two veterans were wounded and later died. President Herbert Hoover then ordered the Army to clear the veterans’ campsite. 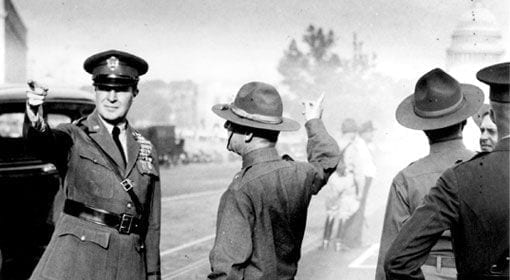 The breakup of the WWW I veterans was led by:

MacArthur is considered to have exceeded President Hoover’s intentions [and possibly his explicit instructions] with his heavy-handedness.

They led an army of men supported by six tanks against the Bonus Army marchers with their wives and children driven out, and their shelters and belongings burned.

A second, smaller Bonus March in 1933 at the start of the Roosevelt administration was defused in May with an offer of jobs with the Civilian Conservation Corps at Fort Hunt, Virginia, which most of the group accepted. Those who chose not to work for the CCC by the May 22 deadline were given transportation home.[2] In 1936, Congress overrode President Franklin D. Roosevelt’s veto and paid the veterans their bonus nine years early.

It happened at 4:45 p.m. Wikipedia states that thousands of civil service employees left work early that day, lining the street to watch the confrontation. The Bonus Marchers apparently thought at first, that the troops were marching in their honor. They cheered the troops until Patton ordered the cavalry to charge them—an action which prompted the spectators to yell, “Shame! Shame!”

After the cavalry charged, the infantry, with fixed bayonets and Adamsite (DM) gas, an arsenical vomiting agent, entered the camps, evicting veterans, families, and camp followers. The veterans fled across the Anacostia River to their largest camp and President Hoover ordered the assault stopped.

However Gen. MacArthur, feeling the Bonus March was a “Communist” attempt to overthrow the U.S. government, ignored the President and ordered a new attack.

Fifty-five veterans were injured and 135 arrested. A veteran’s wife miscarried. When 12-week-old Bernard Myers died in the hospital after being caught in the tear gas attack, a government investigation reported he died of enteritis, (inflammation of the intestine) while a hospital spokesman said the tear gas “didn’t do it any good.”

[Sources] 1. Great Events VI as reported in The New York Times 2. The photos are from the Library of Congress and National Archives an 3.  Wikipedi WWWI Veterans.