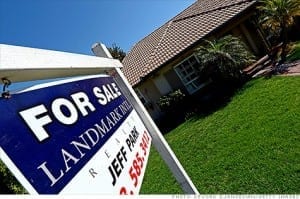 NEW YORK (CNNMoney) — In another sign of a turnaround in the long-battered real estate market, average home prices rebounded in July to the same level as they were nine years ago.

According to the closely watched S&P/Case-Shiller national home price index, which covers more than 80% of the housing market in the United States, the typical home price in July rose 1.6% compared to the previous month.

It marked the third straight month that prices in all 20 major markets followed by the index improved, and it would have been the fourth straight month of improvement across the full spectrum if not for a slight decline in Detroit in April.

The index was up 1.2% compared to a year earlier, an improvement from the year-over-year change reported for June. While home prices have been showing a sequential change in recent months, it wasn’t until June that prices were higher than a year earlier.

The July reading matched levels last seen in summer 2003, when the market was marching toward its peak in 2006. The collapse of the market after that led to the financial crisis of 2008.

“The news on home prices in this report confirm recent good news about housing,” said David Blitzer, Chairman of the Index Committee at S&P Dow Jones Indices. “Single-family housing starts are well ahead of last year’s pace, existing home sales are up, the inventory of homes for sale is down and foreclosure activityis slowing.”

Record low mortgage rates and a tighter supply of homesavailable for sale have helped to lift home prices. Lower unemploymentalso has helped with home prices, although job growth in recent months has been slower than hoped.

Earlier this month, the Federal Reserve announced it would buy $40 billion in mortgage bonds a month for the foreseeable future. This third round of asset purchases by the central bank, popularly known as QE3, is its effort to jump start the economy through even lower home loan rates.