The History of the Purple Heart Medal 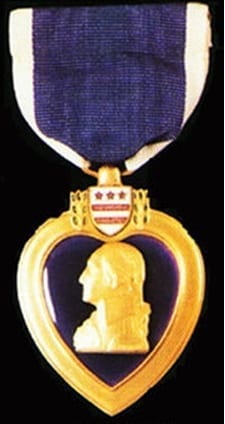 On August 7, 1782, George Washington – commander-in-chief of the Continental Army – created the first Purple Heart Award, originally called the Badge of Military Merit at the Newburgh, NY headquarters. This badge is considered to be the first official military combat badge of the U.S. Armed Forces.

At this time, the Badge of Military Merit was only awarded to three Revolutionary War soldiers and fell into disuse following the War of Independence. Although never abolished, the award of the badge was not proposed again officially until after World War I. 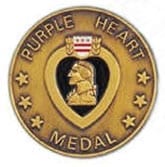 The Purple Heart is awarded in the name of the President of the United States to any member of the Armed Forces of the United States who, while serving under competent authority in any capacity with one of the U.S. Armed Services after 5 April 1917, has been wounded or killed, or who has died or may hereafter die after being wounded:

Current active duty personnel are awarded the Purple Heart upon recommendation from their chain of command, stating the injury that was received and the action in which the service member was wounded. The award authority for the Purple Heart is normally at the level of an Army Brigade, Marine Corps Division, Air Force Wing, or Navy Task Force.

The National Purple Heart Hall of Honor is located in the Town of New Windsor, New York (near Newburgh). The mission of the Hall of Honor is to collect and preserve the stories of Purple Heart recipients from all branches of service and across generations in an attempt to ensure that all recipients are represented. Their stories are preserved and shared through a series of exhibits, live and videotaped interviews with Veterans themselves, and the Roll of Honor, an interactive computer program detailing the stories of each individual.

Our prayers to all who sacrificed, both past and present, living and deceased.

Thanks to all my brother and sister U.S. Veterans and Military!