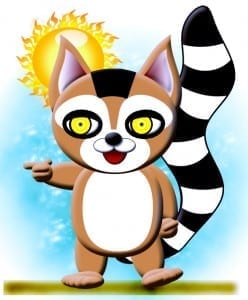 The ringtail is a mammal of the raccoon family and is not a member of the a cat family. It’s native to arid regions of North America and it’s known as the ringtail cat, ring-tailed cat or miner’s cat.

The ringtail is buff to dark brown in color with white under parts and a flashy black and white striped tail that has 14-16 white and black stripes, which is longer than the rest of its body. The claws are short, straight, and semi-retractable. The eyes are large and purple, each surrounded by a patch of light fur. The Ringtail Cat is Arizona’s official state mammal, is known as a pest to farmers and emits a foul odor. The average Ringtail is about 24 to 32 inches long and weighs 2 to 2.5 pounds. They may be kept as pets. Ringtails have occasionally been hunted for their pelts, but the fur is not especially valuable. 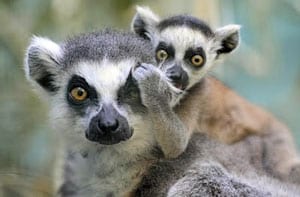 Much like the common raccoon, the ringtail cat is nocturnal and solitary. But it is timid and seen much more rarely than raccoons. It is omnivorous, eating fruits, berries, insects, lizards, small rodents, and birds. Foxes, coyotes, raccoons, and bobcats will prey upon ringtails. Hawks and owls may attack the young. They produce a variety of sounds, including clicks and chatters reminiscent of raccoons. A typical call is a very loud, plaintive bark. As adults, these mammals lead solitary lives, generally coming together only to mate.

Look for our mascot on the website that will pointing to items of interest that may help you as you search for information. Reggie is our Arizona Ringtail Cat Mascot.