Wreaths Across America 2013 – Brothers in Arms – Past Present Future

Wreaths Across America 2013 – Brothers in Arms – Past Present Future 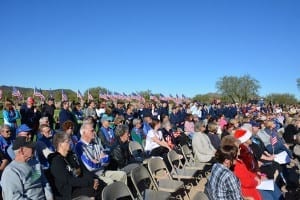 Wreaths across America Brothers in Arms – Past Present Future is an attempt to share a remarkable experience and some emotions of my own.

There are days when memories sweep over me like they just happened yesterday. The most pronounced and emotional of those is almost always associated with experiences in the military. Today was one of those days as we attended the Wreaths Across America ceremonies at the National Memorial Cemetery of Arizona in Phoenix.

It was gratifying to see the many people that showed to honor the veteran’s that were laid to rest here at this place of honor and peace. People in their nineties and some little people that were barely crawling were also in attendance. ROTC, Cadets, teens, twenty something, thirty something, and every decade seemed to be represented by this group of people that came to pay their respects.

At a crossroad one of the old guard that sported a Vietnam hat indicating he was from the 82nd was directing traffic. As I approached an elder gentleman stopped and asked him what was going on and the veteran explained, he then asked if he was here for the event. The elder explained that he was not, and that he came to visit his brother (biological) who was in WW II with him but in different units. He made it home but his brother did not. They got him home so he could be close to family. He came to visit his brother this day. 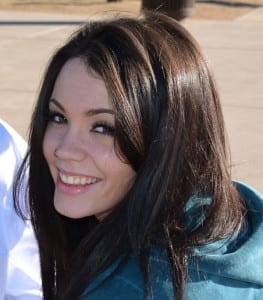 All Generations Were Represented

At the ceremony we were reminded that over 93,000 were either not recovered, POW’s or MIA’s and have not returned home. WW II had by far the largest with Korea and Vietnam following with smaller numbers respectfully.

The ceremony was moving and rememberable. The Pledge of Allegiance was recited, our National Anthem was sang by a Navy Wave with a golden voice, and Taps was played by a Marine that could really blow a horn. Both of those gave me chills and make me tear a bit as I recall those that gave all.

Once the formal ceremony completed all that attended took a wreath and placed it at one of the veteran’s last resting place. 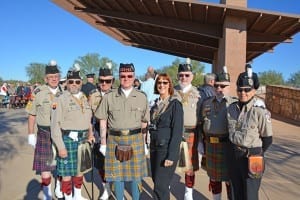 As we progressed through the ceremony my mind begin to meander back to the past, my brothers that I spent time with, and those that gave all in Vietnam, Cambodia, Laos, and other places in the world unknown to most. As the veterans begin returning to the states they arrived to experience another kind of war, one that was more difficult than the one they just experience.

That war birthed many myths, some of which is repeated on this forum. In an attempt to dispel those I have gathered data that comes from the public domain that is as close to fact that I can achieve. I have made this available for those that would like to know fact from myth.  Go to the article titled; Vietnam War History and Statistics. The URL is as follows: https://www.scottsdalerealestatearizona.com/vietnam-war-history-statistics.html

The laying of the wreath to a Vietnam Veteran

It’s rewarding to see our citizens honor our military today and the Vietnam veterans that have stepped up to what they can to assure when the men and women that come home after serving this incredible country are honored. Hopefully this country will never disrespect those that serve as was the case in the past. We need to remember that our military are here to serve us and they are following the orders of the civilian population led be our politicians in Washington.

To see the young and old at these events to honor our fallen warms my heart and fills it with pride. To our citizens of the United States of America – Thank you for your support.