The United States Flag Code, first adopted in 1923, and later appended, prescribes flag etiquette for a variety of circumstances ensuring that our national symbol is treated properly.

“Because the U.S Flag is the symbol of our country, it should always be displayed in the most prominent most honored position. No other flag should ever appear more important”

The National Flag represents the living country and is considered to be a living thing emblematic of the respect and pride we have for our nation. Display it proudly.

§173. Display and use of flag by civilians; codification of rules and customs; definition

§174. Time and occasions for display

(a) Display on buildings and stationary flagstaffs in open; night display

It is the universal custom to display the flag only from sunrise to sunset on buildings and on stationary flagstaffs in the open. However, when a patriotic effect is desired, the flag may be displayed twenty-four hours a day if properly illuminated during the hours of darkness.

(b) Manner of hoisting

The flag should be hoisted briskly and lowered ceremoniously.

The flag should not be displayed on days when the weather is inclement, except when an all
weather flag is displayed.

§175. Position and manner of display

The flag, when carried in a procession with another flag or flags, should be either on the marching right; that is, the flag’s own right, or, if there is a line of other flags, in front of the center of that line.

(a)  The flag should not be displayed on a float in a parade except from a staff, or as provided in subsection (i) of this section.

(b)  The flag should not be draped over the hood, top, sides, or back of a vehicle or of a railroad train or a boat. When the flag is displayed on a motorcar, the staff shall be fixed firmly to the chassis or clamped to the right fender.

(d)  The flag of the United States of America, when it is displayed with another flag against a wall from crossed staffs, should be on the right, the flag’s own right, and its staff should be in front of the staff of the other flag.

(e)  The flag of the United States of America should be at the center and at the highest point of the group when a number of flags of States or localities or pennants of societies are grouped and displayed from staffs.

(g)  When flags of two or more nations are displayed, they are to be flown from separate staffs of the same height. The flags should be of approximately equal size. International usage forbids the display of the flag of one nation above that of another nation in time of peace.

(j)  When the flag is displayed over the middle of the street, it should be suspended vertically with the union to the north in an east and west street or to the east in a north and south street.

(k)  When used on a speaker’s platform, the flag, if displayed flat, should be displayed above and behind the speaker. When displayed from a staff in a church or public auditorium, the flag of the United States of America should hold the position of superior prominence, in advance of the audience, and in the position of honor at the clergyman’s or speaker’s right as he faces the audience. Any other flag so displayed should be placed on the left of the clergyman or speaker or to the right of the audience. 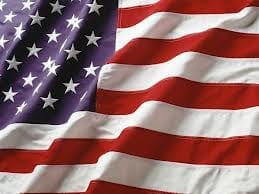 (n)  When the flag is used to cover a casket, it should be so placed that the union is at the head and over the left shoulder. The flag should not be lowered into the grave or allowed to touch the ground.

§177. Conduct during hoisting, lowering or passing of flag

During the ceremony of hoisting or lowering the flag or when the flag is passing in a parade or in review, all persons present in uniform should render the military salute. Members of the Armed Forces and veterans who are present but not in uniform may render the military salute. All other persons present should face the flag and stand at attention with their right hand over the heart, or if applicable, remove their headdress with their right hand and hold it at the left shoulder, the hand being over the heart. Citizens of other countries present should stand at attention. The salute to the flag in a moving column should be rendered at the moment the flag passes.