The World’s Most Expensive Apartment Building Sold For $237 Million

The World’s Most Expensive Apartment Building Sold For $237 Million

The World’s Most Expensive Apartment Building 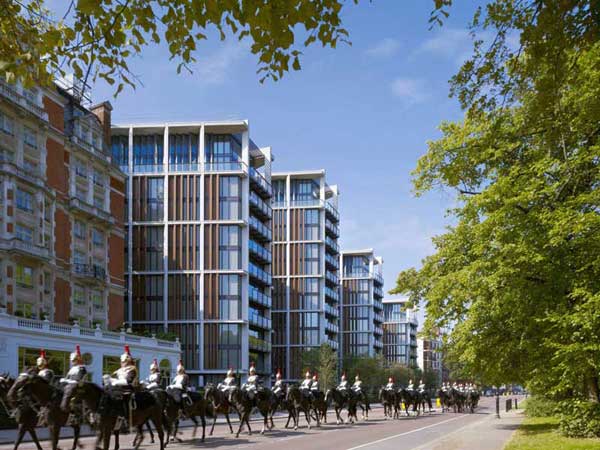 The London real estate market is on fire, with an unfinished penthouse apartment at ultra-luxury residence One Hyde Park selling to an unnamed Eastern European buyer for a record $237 million, according to Reuters.

Developer Candy & Candy confirmed the sale of the 16,000-square-foot duplex penthouse — one of four in the development — billed as the world’s most expensive apartment building, with more than $3.37 billion in sales to date.

While the developer could not confirm the sale price, real estate experts have valued the finished penthouse at as much as $295 million, according to Candy & Candy.

One Hyde Park has been setting real estate records in London and worldwide since it launched in 2011. At that time, residences in the 86-apartment building were selling for around $11,270 per square foot, nearly three times the typical price of luxury London real estate.

Now, the average price per square foot is $10,102, though units have gone for as much as $12,360 per square foot, said a representative for Candy & Candy.

The building made headlines that same year when Ukrainian oligarch Rinat Akhmetov paid $216 million for a penthouse and apartment in the complex. Until this latest sale, it was the most expensive residence ever sold in Britain.

So what’s it like to live in the world’s most expensive apartment building?

One Hyde Park, located in Knightsbridge, is adjacent to Hyde Park and the Mandarin Oriental hotel. It has 86 residences, but just 17 are listed as primary residences, according to a recent exposé in Vanity Fair. Among other perks, there’s a stainless steel ozone pool, an entertainment suite, a golf simulator, and a spa run by the Mandarin Oriental. There are also temperature-controlled wine cellars, a car-cleaning and valet service, and basement parking.

One Hyde Park is home to Russian Oligarchs, Chinese billionaires, and Arab sheikhs, as well as celebrities and businessmen from London. Security in the building is insane. There are panic rooms, bulletproof glass, and guards trained by British Special Forces, according to Vanity Fair. The Sheikh paid $64 million for his triplex in the development, which Vanity Fair called “the best apartment of all.”