Agent Orange: The Legacy Of The Vietnam War – Color Us Orange 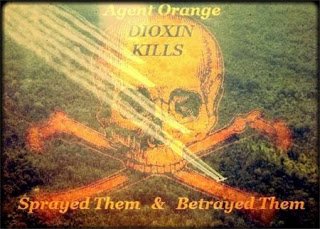 Agent Orange – June, 1969, Tan An Province, South Vietnam:  We were told to hold off our landing until the C-123’s finished their spraying run on a strip of thick jungle on the river. As soon as they were finished, we flew our Huey into a small clearing to complete a medevac of six wounded GI’s. As we were climbing out we could see the distinctive tail-high profiles of the 123’s starting another run on a nearby area. Our medic, Johnny Tobin, came on the intercom: 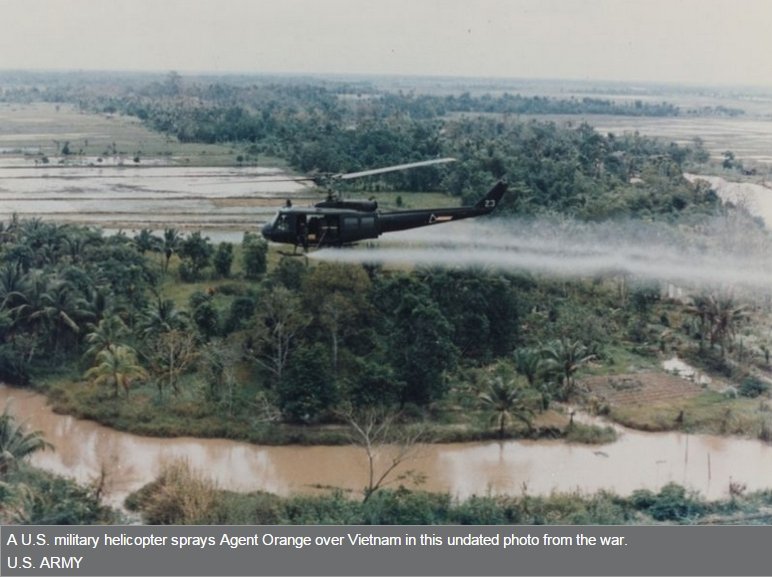 The story of Agent Orange is fairly well known, but considering new generations of young Americans who might barely recall reading about the Vietnam War, let alone living through it, and for some who might have slept, smoked, drank or danced their way through the sixties and seventies, a short retelling and update of the story might open an eye or two.

Based in large part on a Rand study, the United States military began using herbicides and defoliants in Vietnam in 1962, with the expressed intent to prevent the communist guerilla forces, the Vietcong, from being supplied food by local farmers, and to defoliate jungle and forest areas which provided cover for the guerillas. Manufactured by Monsanto Corporation, Dow Chemical, and others, the agent was a mix of two phenoxyl herbicides, 2,4-dichlorophenoxyacetic acid (2,4-D) and 2,4,5 – trichlorophenoxyacetic acid (2,4,5-T), the latter being contaminated with one of the most toxic dioxins, 2,3,7,8 – tetrachlorodibenzodioxin (TCCD).

The mixture was shipped to the military in Vietnam in chemical drums marked with a colored orange stripe. The military reportedly mixed and used the chemicals at a rate of six to twenty-five times the strength recommended by the manufacturers.

During the war, from 1962 to 1971, the military sprayed an estimated 17 to 20 million gallons of Agent Orange (and other agents containing Dioxin, such as agents Green, Pink, Purple, Blue and White) on parts of South Vietnam, Laos, and Cambodia in defoliation campaigns code namedOperation Trail Dust, and Operation Ranch Hand (originally code named, more aptly, Operation Hades).  Twelve percent of the area of South Vietnam was affected, destroying an estimated 5 million acres of forests and crops. (By reference, the entire state of Maryland contains about 7.5 million acres, New Hampshire contains about 5.7 million acres.) Herbicides were not developed solely for Vietnam.

During World War II the U.S. and U.K. conducted research on the military applications of herbicides, including test flights using 2,4-D in 1944 and 1945. Research in the United States continued during the 1950’s, leading to a ‘successful’ military demonstration of the tactical use of herbicides by spraying 2,4-D and 2,4,5-T from aircraft over a four square mile area at Fort Drum, New York.

Herbicide spraying in Vietnam was conducted primarily by specially outfitted C-123 Provider aircraft, and by helicopters, trucks, boats, and backpack hand sprayers. GIs would off load the 55 gallon drums, stack and store them at base locations, open, mix and load the herbicide onto aircraft, boats and vehicles, and transport numerous drums to villages and small airfields for further storage until use.

Empty drums were used by GIs and locals for numerous purposes, including: barbecue pits, trash burning, storage of other liquid products including fuel, as sand filled revetment walls for aircraft protection, as containers for holding water for field showers, and for use in villages as structural components, water and food containers, and for other domestic and farming purposes. Dioxins from Agent Orange settled into the soil and sediment, and are detectible today in extremely high doses especially around the former major air bases where the U.S. military had off-loading and storage facilities. Dioxins affected the animal and bird species in Vietnam, and left the defoliated forest areas susceptible to ongoing erosion, loss of seeding forest stock, and made regeneration difficult and in some cases impossible.

Civilians in villages affected by the spraying were contaminated by the crops they farmed and ate, and by the ground water they drank. The Vietnam Red Cross, in a study referenced by the Department of Veterans Affairs, estimates that three million Vietnamese have been affected by Agent Orange, including children born with birth defects. As with most air operations of that type, the spraying of herbicides was not an exact science. It was susceptible to wind drifts, weather, errors in navigation, careless handling, improper storage, casual use of contaminated containers, spillage, and occasional releases of toxins over heavily populated areas, and areas where U.S. troops were conducting operations. As a result, American troops, to one degree or another, were conducting ground or air operations in the immediate vicinity of spraying, slept in contaminated areas, worked at bases where the agent was mixed or stored, or were susceptible to doses of contaminants in their food and water supplies.

Concerns for the health issues of humans involved with Agent Orange commenced in 1965 with Dow Chemical beginning discussions on the toxic nature of Dioxins. In 1969, Bionetcs Research Laboratories published a study showing that Dioxin caused deaths in laboratory animals.

A report prepared by the National Institutes of Health in 1969 presented evidence that 2,4,5-T caused malformations in offspring of mice, and as a result the military ordered a limitation of Agent Orange use to areas remote from the population.

Two million, six hundred thousand Americans served in Vietnam. Of those, 58,200 were killed, and 304,000 wounded. Between the end of the Vietnam War and 1977, the Department of Veterans Affairs began receiving claims from Vietnam veterans for disabilities they believed were associated with exposure to Agent Orange. These claims were routinely denied unless the veterans could prove that their health conditions began when they were in the military or within a year of discharge.

By the early 1990s, of the 39,400 veterans who filed claims for disability issues related to Agent Orange (or other Dioxin contaminated herbicides) the V.A. had compensated 486 veterans. During the 1980s additional studies were conducted, class action law suits filed, and expert testimony given before Congress, resulting in the Agent Orange Act, enacted by Congress in 1991. The Act gave the Department of Veterans Affairs the authority to declare certain conditions “presumptive” to Agent Orange/Dioxin exposure.

The list of conditions has grown since 1991, and now includes: prostate cancer, respiratory cancers, multiple myoma, type II diabetes, Hodgkin’s, and more. The list has been expanded to include conditions borne by offspring of veterans, and specific conditions suffered by women who served in Vietnam.

The United States has been in negotiations with Vietnam concerning the health impact of Agent Orange on the Vietnamese population and offspring. In 2007 the U.S. made $3 million available for public health programs in Vietnam, in particular in areas surrounding former U.S. military bases where Agent Orange was mixed and stored.

In 2011, the U.S. began a decontamination campaign of Dioxin contaminated areas in Vietnam, with $32m allocated by the Congress to fund the effort. There are 25-30 former military bases in Vietnam where Agent Orange was mixed or stored. Testing for Dioxin has been conducted at former bases, including Da Nang, Phù Cát, and Biên Hòa, resulting in high levels of Dioxin still present in the soil and sediment, in some cases up to 350 times higher than the standard of international recommendations for action. 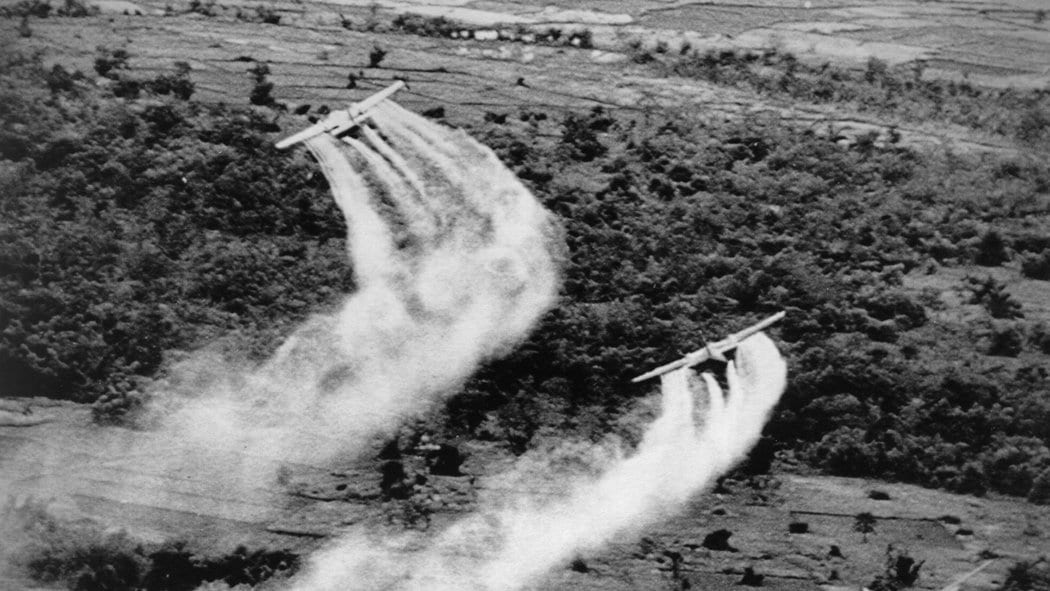 Agent Orange continues to be the gift that keeps on giving as a result of the dioxins used in the Vietnam War.  Those of us who were there and experience the war, and watched the sacrifice, duty, and heroism. Today Agent Orange is a big factor in the reported Vietnam warriors at an estimated 390 deaths per day. We all knew the consequences of when the metal introduced itself to our bodies. What we didn’t know was the consequences of Agent Orange.

To search for lessons is a futile gesture, since all wars have their human legacies, whether addiction, depression, nightmares, wounds, disabilities, or cancer, and none of it will ever stop until we realize the consequences of what we do as a nation, not only to other people but to ourselves. We can only assume that the coming years will bring additional revelations about chemicals used in Iraq and Afghanistan, and other places we have yet to experiment with. There’s a lot more to war than meets the eye.

It’s not all patriotism, parades, medals, speeches, and is America right or wrong. There are human consequences that never seem to enter into the equation when the suits and generals sit around the conference tables in Washington, and plan the futures of men and women warriors in the field. 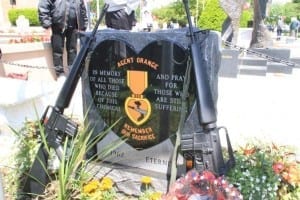 When the last helicopter lifted off from Saigon on April 29, 1975, we were told the Vietnam War was over. It turn out that for the Vietnam Veteran, another war just begun. The dioxins were the enemy, and they attacked with out prejudices with cruel intentions that left the victims debilitated, and in too many cases suffering in severe pain.

Medical research has enabled the VA to has recognize certain cancers, and other health problems as diseases associated with exposure to Agent Orange during military service. Some of those are listed as follows:

Females Invest in Real Estate Making It a Priority

Females Invest in Real Estate Making It a Priority