April’s Price Rise Makes for Another Increase in Home Values

Nationally, housing prices have bottomed and are on the rise. Asking prices on for-sale homes were 1.9% higher in April than one quarter ago. A 0.5% month-over-month rise in April, on top of month-over-month price increases in March and February, makes for three months in a row of rising asking prices, after adjusting for typical seasonal trends. In fact, prices have been stable or rising for the past eight months, except for a dip in December 2011. This marks a new milestone: asking prices were 0.2% higher in April than a year ago. Before April, prices were still falling year-over-year. 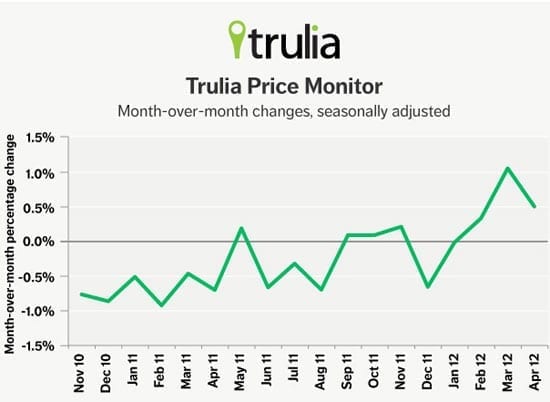 Not only are rising prices starting to look like a real trend: they’re also coming to a market near you — if they haven’t already. Asking prices increased year-over-year in 44 out of the 100 largest metropolitan areas, with Miami and Phoenix leading the charge.

Why these markets? One factor is job growth, which boosts housing demand. Miami, Phoenix, Warren-Troy-Farmington Hills (suburban Detroit) and Denver all saw strong employment gains in the past year. Another factor is the big price declines after the bubble, which attracted house hunters and investors searching for bargains to those markets. Most of the metros with the largest price increases in the last year had huge price declines during the bust, including Phoenix, Warren-Troy-Farmington Hills and the four Florida metros in the top ten. But among the metros with the largest price declines over the past year, only three–Sacramento, Las Vegas and Fresno–had huge overall price drops after the bubble burst. 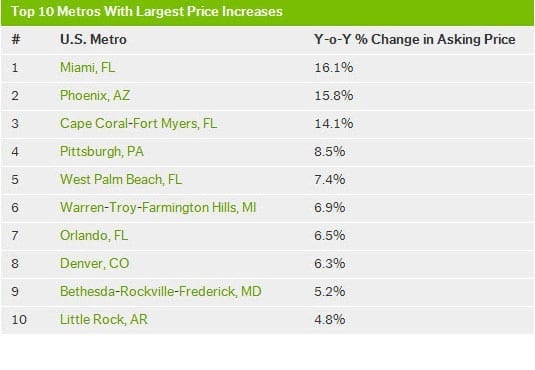 Note: Rankings based on the year-over-year changes in asking price among the 100 largest U.S. metropolitan areas.

Seattleites, take heart: in the most recent quarter, most of the metros with year-over-over price declines have turned around. Prices rose quarter over quarter in 92 of the 100 largest metros, including in Seattle, Las Vegas and Atlanta.