Memorial Day 2016: Monday, May 30th  – This weekend we reflect on all those who gave their lives in support of this great nation. 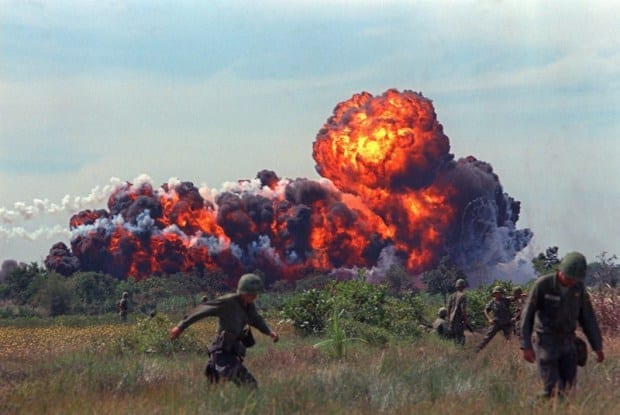 A napalm strike erupts in a fireball near U.S. troops on patrol in South Vietnam, 1966 during the Vietnam War. (AP Photo)

While those who died are also remembered, Veterans Day is the day set aside to thank and honor ALL who served—in wartime or peacetime, whether they died or survived. Veterans Day is always observed officially on November 11, regardless of the day of the week on which it falls.

When duty called, they answered. Some were drafted, others enlisted to serve our country. It didn’t matter where they came from or how they got there, none of them could imagine what waited for them on the other side of the world. The Department of Defense reports 2,594,00 served within the borders of Vietnam. Of those between 1 – 1.6 million fought in combat. The Vietnam War experience changed these warriors forever.

Together they fought against a relentless enemy in an unforgiving country. Some were wounded, some became prisoners of war, and others paid the ultimate price. In Vietnam, boys became men, men became warriors, and warriors became brothers. They built a bond of brotherhood that will never be broken. Men who face death together every day never forget. It gives them a quiet strength that they carry inside.

In Vietnam, the warriors become part of a fraternity of proud members of America’s Armed Forces that dates back to the Revolution. Under fire, men became brothers. They found and formed a bond that would remain steadfast, even after their return home from Vietnam. Today when Vietnam Veterans gather at reunions, they share a bond that most of the population will never know. Feelings, Stories, Secrets, Special moments. The true meaning of survival. And even though the war is part of history, they know what it’s like to trust their life to the man beside them, and be willing to lay theirs on the line for their brothers.

On Memorial Day 2016 and Veteran’s Day, the citizens of these United State of America may honor the member of the exclusive American brotherhood that stood together in service to America. Their service and sacrifice is a debt that can never be repaid. As our nation observes the 50th Anniversary of the Vietnam War, this generation of heroes may receive the respect and recognition by the citizens they served.

Over 58,200 plus warriors died during combat and another 303,704 were wounded in Vietnam. Missing in Action: 2,338 and while an extensive effort has been ongoing, not all have been returned home. More support from the Vietnam government should have been part of the negotiations in the new arms deal made by President Obama and the government of Vietnam.

Nineteen million gallons of Agents Orange, Blue, White, and Purple were sprayed over an area the size of Rhode Island and Massachusetts combined (over 6 million acres), applied up to 14 times the recommended domestic agricultural application rate. Subsequently, these chemicals have been banned in the U.S. due to their intense toxicity, being considered, perhaps, the most potent cancer-causing substance ever studied by the Environmental Protection Agency.

There is a high rate of cancer, neurological, and heart disease that is attributed to Agent Orange. As a result there is an accelerated death rate among the Vietnam Veterans.

Today, it is estimated that approximately 390 Vietnam Veterans are dying each day. General Macarthur said,”Old soldiers never die they just fade away”, and so the Vietnam warriors are fading away- Just faster than most.

Statistics of the Vietnam War.