Vietnam War Its History Its Statistics Part V of VI

Vietnam War Its History Its Statistics Part V of VI 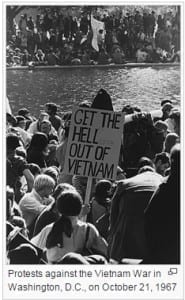 The war in Vietnam was fought mainly by the sons, brothers, husbands, and friends of the working class. The nucleus for this was because the national structure at the time made it easy for large numbers of men to participate in draft deferment by going to college, getting married, feigning homosexuality, or faking a medical condition. As such, this privileged class were often the radical opposition to the war. They remained detached and impersonal because they personally didn’t know anyone that was fighting in the war. Protesting came easy for them.

Myth: Air America, the airline operated by the CIA in Southeast Asia, and its pilots were involved in drug trafficking.

The 1990 unsuccessful movie “Air America” helped to establish the myth of a connection between Air America, the CIA, and the Laotian drug trade. The movie and a book the movie was based on contend that the CIA condoned a drug trade conducted by a Laotian client; both agree that Air America provided the essential transportation for the trade; and both view the pilots with sympathetic understanding. American-owned airlines never knowingly transported opium in or out of Laos, nor did their American pilots ever profit from its transport. Yet undoubtedly, every plane in Laos carried opium at some time, unknown to the pilot and his superiors. For more information see: http://www.air-america.org

Facts about the fall of Saigon 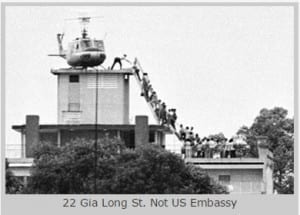 This famous picture is the property of UPI Corbus-Bettman Photo Agency.

It is one of 42 pictures of this helicopter that UPI photographer, Hubert Van Es took on 29 April 1975 from UPI’s offices on the top floor of the Saigon Hotel that was several blocks from the Pittman Apartments. [People]

Here are some facts to clear up that poor job of reporting by the news media. It was a “civilian” (Air America) Huey, not Army or Marines. It was NOT the U.S. Embassy. The building is the Pittman Apartments, a 10 story building where the CIA station chief and many of his officers lived, located at 22 Ly Tu Trong St. The U.S. Embassy and its helipad were much larger. 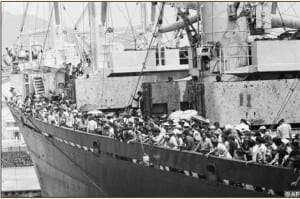 The platform is the top of the elevator shaft for the building and was not designed as a helipad.  [People] The evacuees were Vietnamese not American military.  Two high ranking Vietnamese where among those taken that day to Tan Son Nhut airport, General Tran Van Don and the head of the secret police Tran Kim Tuyen.  Both immigrated to Europe and both have since died.  [People]

The person who can be seen aiding the refugees was CIA operations officer, Mr. O.B. Harnage, who is now retired in Arizona.  The pilots who were flying this helicopter, tail number N4 7004, were Bob Caron who lives in Florida and Jack “Pogo” Hunter who died in 1997.  [People]

It has been said that the American’s were the perpetrators of a famous photo was taken of nine year old Vietnamese girl running naked from the napalm strike where she was burned near Trang Bang.

This was a horrific event for the young girl, and the Americans were blamed for the incident by the protestors.

You will learn more about what happened on this day in Part VI of this series and the women that serve in-country.