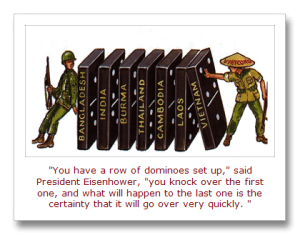 In Southeast Asia, the United States government used the domino theory to justify its support of a non-communist regime in South Vietnam against the communist government of North Vietnam, and ultimately its increasing involvement in the long-running Vietnam War (1954-75).

Myth: The domino theory proved false. The domino theory was accurate. The ASEAN (Association of Southeast Asian Nations) countries, the Philippines, Indonesia, Malaysia, Singapore, and Thailand stayed free of Communism because of the U.S. commitment to Vietnam. The Indonesians threw the Soviets out in 1966 because of America’s commitment in Vietnam. The result of that commitment, Communism would have swept all the way to the Malacca Straits that is south of Singapore and of great strategic importance to the free world. If you ask people who live in these countries that won the war in Vietnam, they have a different opinion from the American news media. The Vietnam War was the turning point for Communism. [Westmoreland]

Democracy Catching On – In the wake of the Cold War, democracies are flourishing, with 179 of the world’s 192 sovereign states (93%) now electing their legislators, according to the Geneva-based Inter-Parliamentary Union. In the last decade, 69 nations have held multi-party elections for the first time in their histories. Three of the five newest democracies are former Soviet republics: Belarus (where elections were first held in November 1995), Armenia (July 1995) and Kyrgyzstan (February 1995). Two are in Africa: Tanzania (October 1995) and Guinea (June 1995). [Parade Magazine]

Myth: The fighting in Vietnam was not as intense as in World War II. The average infantryman in the South Pacific during World War II saw about 40 days of combat in four years. The average infantryman in Vietnam saw about 240 days of combat in one year thanks to the mobility of the helicopter. One out of every 10 Americans who served in Vietnam was a casualty. 58,220 were killed and 304,000 wounded out of 2.59 million who served.

Because of the dioxins used from 1961 to 1971 men are dying at a rate of 390 per day from diseases contracted from exposure to Agent Orange.

Although the percent who died is similar to other wars, amputations or crippling wounds were 300 percent higher than in World War II. 75,000 Vietnam veterans are severely disabled. [McCaffrey] MEDEVAC helicopters flew nearly 500,000 missions. Over 900,000 patients were airlifted (nearly half were American). The average time lapse between wounding to hospitalization was less than one hour. As a result, less than one percent of all Americans wounded who survived the first 24 hours died. [VHPA 1993]

The helicopter provided unprecedented mobility. Without the helicopter, it would have taken three times as many troops to secure the 800-mile border with Cambodia and Laos (the politicians thought the Geneva Conventions of 1954 and the Geneva Accords or 1962 would secure the border) [Westmoreland] 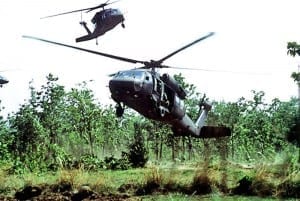 The Huey is believed to be along with the Huey Cobra having more combat flight time than any other aircraft in the history of warfare assuming you count actual hostile fire exposure versus battle area exposure.  As an example, heavy bombers during World War II most often flew missions lasting many hours with only 10 to 20 minutes of that time exposed to hostile fire.  Helicopters in Vietnam seldom flew above 1,500 feet, which is traffic pattern altitude for bombers. In addition, the helicopters were always exposed to hostile fire in their base camps.