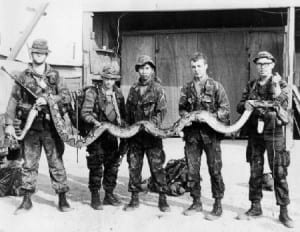 MACV-SOG Team in Vietnam with a Field Hazard – Python

each detachment to operate if necessary in two six-man teams, or split-A teams.

By the time John F. Kennedy was inaugurated as president in January 1961, the three SF groups – the 10th, the 7th (redesignated from the 77th on June 6, 1960) and the 1st – were actively engaged in missions around the world. Under the patronage of President Kennedy, SF flourished. In 1961, President Kennedy visited Fort Bragg. He inspected the 82nd Airborne Division and other conventional troops of the XVIII Airborne Corps. As a student of military affairs, President Kennedy had developed an interest in counterinsurgency – the art and method of defeating guerrilla movements.

As he gazed at the ranks of SF troops, he realized he had the ideal vehicle for carrying out such missions. With President Kennedy firmly behind them, new SF groups sprang up rapidly. On September 21, 1961, the 5th Group was activated, followed in 1963 by the 8th Group on April 1, the 6th on May 1, and the 3rd on Dec. 5. In April 1966, the 46th SF Company activated at Fort Bragg. Formerly Company D, 1st SF Group, 46th Company deployed to Thailand to train the Royal Thai Army until November 1967.

President Kennedy’s interest in SF resulted in the adoption of the Green Beret as the official headgear of all SF troops. Until then, the beret had faced an uphill fight in its struggle to achieve official Army recognition. After his visit to Fort Bragg, the president told the Pentagon that he considered the Green Beret to be “symbolic of one of the highest levels of courage and achievement of the United States military.” Soon, the Green Beret became synonymous with Special Forces.

A Special Forces company normally consists of six ODAs (Operational Detachments-Alpha) or “A-Teams”. Each ODA specializes in an infiltration skill or a particular mission-set (e.g. Military Freefall (HALO), combat diving, mountain warfare, maritime operations, etc.). An ODA is identified by its group, battalion, company, and the team itself. For example, ODA 1234 would be the fourth team in the third company of the second battalion of 1st Special Forces Group.

An ODA consists of 12 men, each of whom has a specific function (MOS, or Military Occupational Specialty) on the team, however all members of an ODA conduct cross-training. The ODA is led by an 18A (Detachment Commander), a Captain, and a 180A (Assistant Detachment Commander) who is his second in command, usually a Warrant Officer One or Chief Warrant Officer Two. The team also includes the following enlisted men: one 18Z (Operations Sergeant) (known as the “Team Sergeant”), usually a Master Sergeant, one 18F (Assistant Operations and Intelligence Sergeant), usually a Sergeant First Class, and two each, 18Bs (Weapons Sergeant), 18Cs (Engineer Sergeant), 18Ds (Medical Sergeant), and 18Es (Communications Sergeant), usually Sergeants First Class, Staff Sergeants or Sergeants. This organization facilitates 6-man “split team” operations, redundancy, and mentoring between a senior NCO and his junior assistant.