The Early Years of Special Forces

Special Forces Part 2 – The Early Years – Special Forces (SF) grew out of the establishment of the Special Operations Division of the Psychological Warfare Center, activated at Fort Bragg, N.C., in May 1952. The Army allocated 2,300 personnel slots to make up the first Special Forces (SF) unit when the Ranger companies fighting in the Korean War were disbanded. 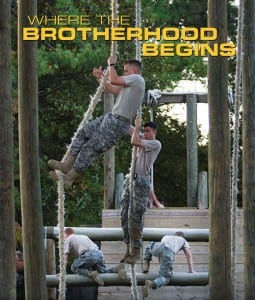 The 10th SF Group was established with Colonel Aaron Bank as the first commander. Concurrent with this was the establishment of the Psychological Warfare School, which ultimately became today’s John F. Kennedy Special Warfare Center and School.

Col. Bank assembled a cadre of officers and NCOs to serve as the foundation of the new unit, and act as a training staff for the fledgling organization. Bank did not want raw recruits. He wanted the best troops in the Army, and he got them as former OSS officers, airborne troops, ex-Rangers and combat veterans of World War II and Korea. After months of preparation, the 10th SF Group was activated on June 11, 1952, at Fort Bragg. On the day of its activation, the total strength of the group was 10 Soldiers – Col. Bank, 1 warrant officer and eight enlisted men. Within months, the first volunteers reported to the 10th SF Group by the hundreds as they completed the initial phase of their SF training.

As soon as the 10th Group became large enough, Col. Bank began training his troops in the most advanced techniques of unconventional warfare. As defined by the Army, the main mission of the 10th SF Group was “to infiltrate by land, sea or air, deep into the enemy-occupied territory and organize the resistance/guerrilla potential to conduct Special Forces operations, with emphasis on guerrilla warfare.” As Bank put it, “Our training included many more complex subjects, and was geared to entirely different, more difficult, comprehensive missions, and complex operations.”

After less than a year and a half as a full SF group, Bank’s men proved to the Army’s satisfaction that they had mastered the skills of their new trade.

On Nov. 11, 1953, half of the 10th SF Group deployed to Bad Tolz, West Germany. The other half remained at Fort Bragg, where it was designated as the 77th SF Group. The split of the 10th and the 77th was the first sign that SF had established itself as an integral part of the Army’s basic structure.

For the rest of the 1950s, SF would grow slowly but consistently. By the end of 1952, the first SF troops to operate behind enemy lines in Korea on missions that remained classified for nearly 30 years.

Anti-communist guerrillas with homes in North Korea and historical ties to Seoul had joined the United Nations Partisan Forces-Korea. Known as “Donkeys” and “Wolfpacks,” the guerrilla units and their American cadre operated from tiny islands off the North Korean coast. The partisans conducted raids on the mainland, and rescued downed airman. Under the guidance of a select group from the 10th SF Group and other U.S. cadre, they eventually numbered 22,000 and claimed 69,000 enemy casualties.

The U.S. Army John F. Kennedy Special Warfare Center and School (USAJFKSWCS) at Fort Bragg, N.C., is one of the Army’s premier education institutions, managing and resourcing professional growth for Soldiers in the Army’s three distinct special operations branches: Special Forces, Civil Affairs and Psychological Operations. The Soldiers educated through USAJFKSWCS programs are using cultural expertise and unconventional techniques to serve their country in far-flung areas across the globe. More than anything, these Soldiers bring integrity, adaptability and regional expertise to their assignments.

On any given day, approximately 3,100 students are enrolled in USAJFKSWCS training programs. Courses range from entry-level training to advanced warfighter skills for seasoned officers and NCOs. The 1st Special Warfare Training Group (Airborne) qualifies Soldiers to enter the special operations community, and teaches them advanced tactical skills as they progress through their careers.

While most courses are conducted at Fort Bragg, USAJFKSWCS enhances its training by maintaining facilities, and relationships with outside institutions, across the country. In all, USAJFKSWCS offers 41 unique courses that give Soldiers the skills they need to survive and succeed on the battlefield.

Photo provided by SOC.MIL/SWCS – US Army