In the Jungles of Vietnam

Special Forces Part 5 – During the Vietnam Era – Nam Dong, Lang Vei, Dak To, A Shau, Plei Mei – these were just some of the places SF troops fought and died during their 15-year stay in South Vietnam. A mission began in June 1957, when the original 16 members of the 14th Special Forces (SF) Operational Detachment deployed to Vietnam to train a cadre of indigenous Vietnamese SF teams. 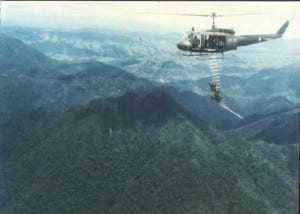 The first and last American Soldiers to die in Vietnam due to enemy action were members of the First SF Group. On Oct. 21, 1957, Captain Harry G. Cramer Jr. was listed as killed in action, (KIA) and on Oct. 12, 1972, Sgt. Fred C. Mick was became listed as KIA.

Throughout the latter years of the 1950s and early 1960s, the number of Special Forces advisers in Vietnam steadily increased. Their responsibility was to train South Vietnamese soldiers in the art of counterinsurgency and to mold various native tribes into a credible anti-communist threat. Initially, elements from the different SF groups were involved in advising the South Vietnamese.

In September of 1964, the Fifth (5th) SF Group formed exclusively to conduct operations in Vietnam. The 5th Group set up its provisional headquarters in Nha Trang. Nearly six months later, in February, Nha Trang became the 5th’s permanent headquarters. From that point on, all SF Soldiers in Vietnam were assigned to the 5th until 1971, when the group returned to Fort Bragg.

During this time other SF training teams were operating in the 1960s in Bolivia, Venezuela, Guatemala, Colombia and the Dominican Republic. Counterinsurgency forces of the Eighth (8th) SF Group conducted clandestine operations against guerrilla forces, carrying out some 450 missions between 1965 and 1968. In 1968, SF-trained Bolivian rangers were involved in tracking down and capturing the notorious revolutionary, Che Guevara, in the wilds of south-central Bolivia.
Southeast Asia, however, was the SF’s primary focus. Through their unstinting labors, SF troops eventually established 254 outposts throughout Vietnam, many of them defended by a single A-team and hundreds of friendly natives.

However, fighting in remote areas of Vietnam – publicity to the contrary – wasn’t the only mission of SF. It was also responsible for training thousands of Vietnam’s ethnic tribesmen in the techniques of guerrilla warfare. SF took the Montagnards, the Nungs, the Cao Dei and others and molded them into the 60,000-strong Civilian Irregular Defense Group. (CIDG) CIDG troops became the SF’s most valuable ally in battles fought in faraway corners of Vietnam, out of reach of conventional backup forces. Other missions included civic-action projects, in which SF troops built schools, hospitals, and government buildings, provided medical care to civilians and dredged canals. This was the other side of the SF mission, the part of the war designed to win the hearts and minds of the people. SF personnel were instrumental in the covert war against North Vietnam. 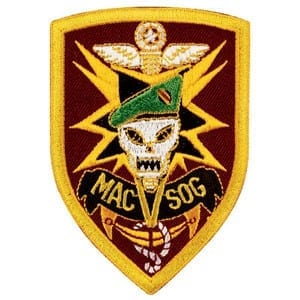 The Military Assistance Command Vietnam-Studies and Observation Group, (MACV-SOG) conducted cross-border operations into Laos, Cambodia, and North Vietnam to disrupt the enemy’s use of the Ho Chi Minh Trail. SF-led teams ran in-country long-range reconnaissance patrols under the Delta, Sigma and Omega projects. In one of the most daring missions of the war, 100 Special Forces Soldiers under Colonel “Bull” Simons launched a raid to rescue 70 American prisoners of war from the Son Tay Prison outside Hanoi. Staged out of Thailand, the assault was successful, but unbeknownst to the U.S., the prisoners, due to the flooding of a nearby river had been moved to a new location.

The valiant attempt, known as Operation Ivory Coast, raised the morale of the POWs, and forced the North Vietnamese into improving the treatment of the captives. On March 5, 1971, the Fifth Group returned to Fort Bragg, although some SF teams remained in Thailand, from where they launched secret missions into Vietnam. At the end of 1972, the SF role in Vietnam was over.

Special Forces Part 6: The Real Stories of Men and Missions

If you’re interested in a career in SF you can read about joining at U.S. Army Special Forces