It was an overcast day and the temperature was in the low forties. I was thinking it would be another great day in Bad Tolz because duty here was almost storybook in nature, it was Sunday and I was to have the afternoon off. 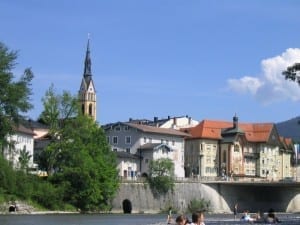 The town is nestled in the foothills of the Bavarian Alps on the beautiful blue green Isar river about 30 miles due south of Munich. It has mineral baths whose iodine-rich waters are known for their soothing and healing powers, and are open to the public to use. People from neighboring cities come just to take a dip.

Bad Tolz is a magical town with its colorfull gingerbread style homes that look like they should be in a fairy tale story. The streets look like cobblestone but are made of granite and are slippery when wet. A myriad of stores and restaurants line the streets of Bad Tolz with the usual German cleanliness that seems to permeate all of Germany.

Bad Tolz history is centuries old but most notable in recent history emanates from WWII. The German SS School was located here and later taken possession by the US Government. After the war, General Patton’s office was located here, and by agreement, the building became the possession of the U.S. Government in perpetuity. It eventually became known as Flint Kaserne, (Kaserne translated from German means barracks) and the home of the U.S. military that included the 10th Special Forces. 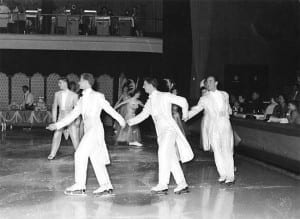 The Casa Carioca Nightclub in Garmisch-Partenkirchen

The rest of the day was mine and I decided to go to Garmisch-Partenkirchen with John, it is about a 55 km drive to another storybook town at the base of the Bavarian Alps. It is also the home of the Casa Carioca nightclub where ice shows are popular. After the ice show, a wooden floor would slide over the ice to make room for more dining and a dance floor.

That afternoon we enjoyed the town, watched the show, and stayed on for a couple of beers. Unfortunately, when we flipped a coin I lost, and became the designated driver. John was just into his first beer when I spotted a beautiful girl, and then asked her to dance. The time flew by, all the while she made my heart pound, and I fell hopelessly in love.

All too soon it was time to head back so we made a date to meet again. I hated to leave and was already looking forward to when I would see her again.

The following Monday, I was called into the office. When I got to the office John was just coming out, and I asked him what was going on, he replied, “Come see me after you get done here”. I walked into the office, reported, and was handed new orders. As I left, Pete was waiting outside the door.

I checked my orders and saw my next assignment – Vietnam.

Next Article: Arriving at Tan Son Nhut Air Base in Vietnam