Vindication Vietnam Veterans You Were Right, America Was Wrong

Vindication Vietnam Veterans You Were Right, America Was Wrong

Vindication Vietnam Veterans article is written by Resa LaRu Kirkland, a woman that was a child when the Vietnam War occurred but was able to capture the heart, and emotions of those veterans that fought in this war. As a member of that combat group, I was amazed that without the personal experiences she was able to bring this story to life. I can say that because my own emotional strings were pulled when reading this story. A hearty thanks to Ms. Kirkland for sharing her story. Her article begins below: 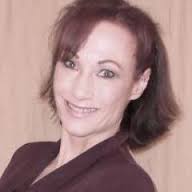 I laughed. It was logical, it was reasonable, and it was undeniable. But it got me to thinking a lot about my Vietnam Vets. Actually, the real time war coverage of Gulf War II had already done that, because there before me were so many of the impossible paradoxes that these men had tried to deal with 30 years ago, played out in full color with no leftist slant. What had caused the Vietnam Vet to shed many a bitter tear and fight for his broken heart with a vigor unique to his war was finally being made indisputably clear to the civilian pukes who had the audacity to judge and condemn these good and decent men placed into an impossible situation.

I was a baby when the war was going on. I can remember being about six or seven, seeing the long-haired, scrawny, filthy and vile hippies, united in their utterly useless existence, carrying their placards, shouting angrily and smelling funny. They were a sharp contrast to the few minutes of news reports a week from a steamy jungle in a strange land, and those focused, determined, and courageous men who were having the truth of what they were trying to do twisted, perverted, and bastardized by a media and film industry who hated them and all that they stood for, and for some reason beyond my child-like reasoning, had chosen to side with the bottom-dwellers of society. Putting aside the sins of the politics and politicians who had put the khaki warriors in that strange place, it was plain to an innocent child even back then who was to be admired, who truly believed what they claimed to believe, who was honorably right and doing what was right–and who was wickedly, treacherously, despicably wrong.

I would listen to the moral dilemmas presented to these good and decent young American boys. Stories of the VC using civilians as human shields, dressing up as civilians-or worse, forcing women and children to do their dirty work!–and pretending to be an innocent by-stander just long enough for one of our boys to let his guard down and pay for it with his life, terrifying and demoralizing those who saw it, rendering them impotent as they struggled between the innate human need for their own self-preservation, and that decent, Godly side of Americans which can scarcely bring us to kill an innocent.

Oh what a wretched, horrible thing to ask of young men raised in a land of Judeo-Christian principles, a love for the individual human life, and the freedom to choose between right and wrong! I remember thinking, even with the limited understanding of a little girl, as the soldiers tried to present their side, begging us to try to comprehend the situation they were in: They’re right…what are they supposed to do when the enemy uses civilians as attackers, pretending to be just a pawn in the war one moment and murdering them the next?

It was an impossible situation, confusing and terrifying, and one that called for empathy, answers, and help, or at least understanding, but was instead misrepresented and outright lied about to the world back home by the malevolent media and the Hollow Heads of Hollywood for decades to come.

What we Americans chose to ignore-then and now–is the fact that the enemy will always use our strengths against us, not just our weaknesses. And the American love for human life and the innocent face of war is a well-known and glorious strength. The best illustration of this was the treacherous and fabricated No Gun Ri story from the early days of the ongoing Korean War. I never saw a single report that even came close to explaining the truth of that situation-and certainly no stories that would go on to receive the now-tarnished Pulitzer Prize!

I had long heard from my Korean War Veterans who were there in the early days of the war that the North Korean Army was ordered to go into villages as they scourged south, forcefully enscript the young men, and then use the elderly, women, and children to form circles around them from which they would fire upon the Americans and ROK soldiers. Kim Il Sung–Fearless Leader and Major Dic–understood the “foolish sentimentality” that American soldiers attached to the individual human life.

“They will hesitate to fire upon unarmed and screaming civilians,” he explained to his generals. “We will use their hesitation to gain the upper hand right from the start.”

It worked. In the beginning, our beautiful American warriors couldn’t bring themselves to fire into a crowd of civilians, and it cost many of them their lives. But what it cost those upright and heartbroken men who survived was far worse.

I know that most people–vets especially–believe that the true heroes never came home. For years, I agreed whole-heartedly.

No Gun Ri taught me that this wasn’t true.

Now understand, those who died forever wear the Victor’s Crown. I will never-in this life or the next-dispute that fact. But their moment of agony was brief; their glory eternal. I am totally convinced that the price those who survived pay is far worse, and far more glorious. The best way to explain that is, as always, with an example.

I remember Jimmy Bowen of El Paso, Texas, telling me that the dreams that haunt him now are not so much the offenses against his buddies or himself, but the dying screams of those women and children and old men who cried out when he finally had to make a horrifying choice–shoot back or die. It was from his story that I decided that the greatest evil of war isn’t what our men have done to them or even to their friends–although that is evil enough. No, the evil of war is what it forces good, decent, Godly men to do and become; not because they want to, but because in order to heed the powerful survival instinct, they have to.

Now Mr. Bowen had friends who died–whose faces remain forever youthful and in front of his eyes–but his sacrifice of never forgetting what he had to do was a far more agonizing and lingering one.

This was the genesis of the No Gun Ri tale. There were no trigger-happy CO’s, no murderous GI’s playing with their big-boy toys, no generals on power trips. It was, as always, decent American boys forced into indecent situations by an evil enemy.

This is why the cries of “Baby Killers!” and “Murderer!” so wounds the heart of the soldier, particularly the Vietnam Vet. It is because he knows the truth behind the lie, and wants only for us to understand, and for God to redeem. It is because even though he knows the truth–that he had to do what he had to do based on the logic and reason of the situation–deep down, the anguish of it all causes him to believe for a moment that he is what they say he is. And he weeps bitter tears; not of regret for service, but for the lies and cruelty he bore during his sacrifice and the unconscionable continuation back home by an ungrateful group of spoiled, drug-addled traitors, liars, and cowards. 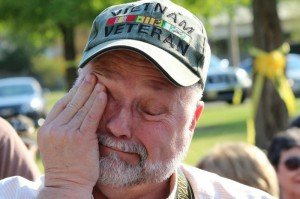 It is for his sacrifice, his unquenched agony that I say this now: My brothers who fought in Vietnam, you were right; America was wrong.

Forgive us, Vietnam Vet. Forgive us for allowing ourselves to be manipulated and lied to by Walter Cronkite and John Kerry and Martin Scorsese and Hanoi Jane. Forgive us for defying logic and reason and asking you to make impossible choices for which we would hold you brutally and unfairly accountable.

Forgive us for being so easily led, even in the face of logic and truth.

Forgive our cowardice in not fighting for your vindication when you had fought so very hard for suffering innocents you didn’t even know.

Forgive us for setting you up, abandoning you, and then being too gutless to admit it and carry some of your burden for you that you might heal and move on.

Forgive us for accusing you of being cry-babies, whiners, and cowards when all you wanted was for us to see what you had no choice but to see:  that you were willing to make the hard choices so we wouldn’t have to.

Forgive us for not admitting that those hard choices had been the correct ones.

This was our failing, our sin, not yours, but we made you carry it anyway.

I am so sorry that I had my perception of you colored by a left-controlled Hippy Press and entertainment industry who went to any means–and gleefully so–to hammer the final nail in your coffin. In spite of such treachery, you not only survived, but banded together like the brothers that you are, and did what weshould have done: recognized and appreciated one another and what you tried to do, and remembered, honored, and revered those who knew because they were there…and still are. You served American and freedom gloriously; we failed you miserably, and I am so very sorry.

There can be no denying now in the face of the only enemy equal to communism:  Islamic terrorists  It is because of the determination of the Vietnam Vet that this new generation of American warrior will be cheered, not vilified. It is because of technology and the mistakes we made with these past vets who had their gift bastardized that we see what they see, face what they face, react the way they react. It is a new war, a new age, but an old and at long last vindication for those who tried in vain to get us to understand what we now watch on FOX News. It is for this–today’s war and yesterday’s agony–that I humbly thank and beg the forgiveness of those who fought and weren’t allowed to win, and had to pay so heavy a price for failings that belonged on others. You deserve this peace, this rest that should at least partially come with this vindication. You will never get it from Hollywood Hell or the Perverted Hippy Press, but I swear to you now, you will get it from those of us who actually matter. 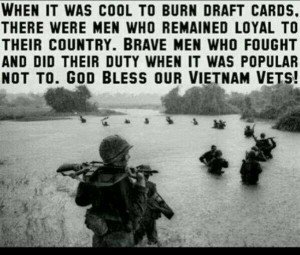 You were then the Vietnam Veteran… you are now the Vietnam Victor.  I’m glad you fought, that you never lost a battle, and that the math of history has not forgotten this and has given you absolution.

You are my hero, and I will love you forever for that.

Keep the faith, bros, in all things courage, and no substitute for VICTORY.